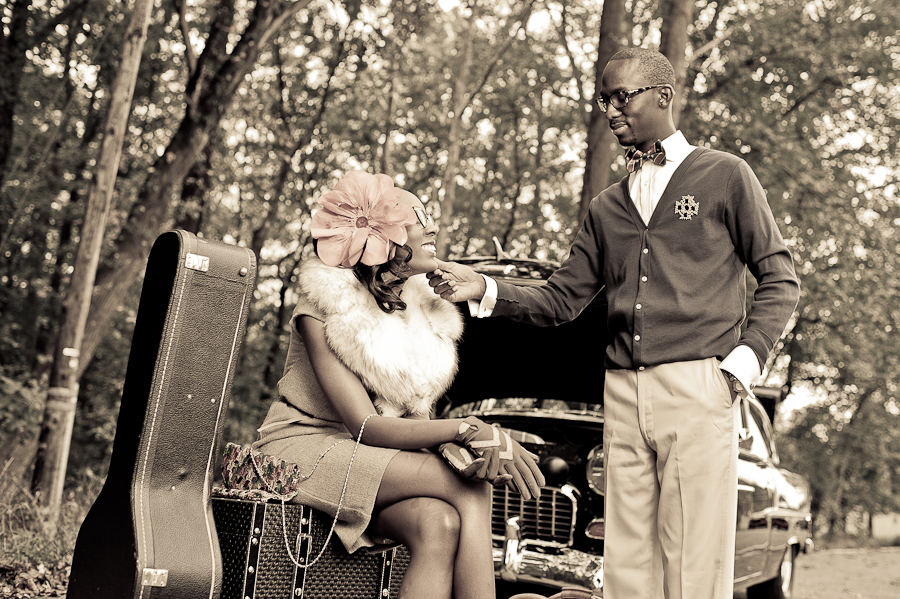 Well well well!!!. I wanted to post the part A to Niyi & Ope’s Vintage Engagement Session. Niyi approached me in June shortly after he proposed to Ope and said. Bro, I need something different and we came up with four different themes and this took weeks of detailed planning.
1st Scene was a vintage E-session using an old school 1955 Chevy Bel Air and we had the help of Nneka Obiako who styled the shoot.
2nd Scene was at a flight school in Bowie.
3rd Scene was shot at the Gaylord Hotel (National Harbor). We rented a room in the hotel.I will be posting the last scene and I will include the beautiful custom made guest book.
4th Scene Downtown DC/ Starbucks, see the previous post on my blog: PART B
Here are some of my favorite shots from Scene 1 & 2
SCENE 1 & 2: Starring Ope Oladapo & Adeniyi Awosan
Executive Director/photographer: Omojesu
Stylist: Nneka Obiako
Make-up Artist: Osarume
Lighting Director: Adebayo www.symplx.com/blog & Ena
Script Written by: Omojesu

PLOT: Adeniyi a successful business man driving in his 1955 Chevy Bel Air on a Saturday Morning gets stopped by a beautiful lady who is in desperate need for a ride, waiting along the road side after her cousin who was meant to give her a ride never showed up. Adeniyi picks her up and the car breaks down on the way to the airport. They form a bound and fall in love and Adeniyi flies her to her destination and they completely fell in love and lived happily ever after loll.
A big thank you to Ena, Nneka, Osarume, Adebayo and the beautiful couple for making the shoot a success. Enjoy!!!